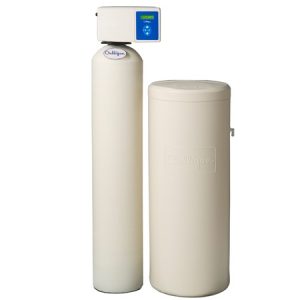 Have you had enough of rust and scum spots on your home appliances? Do you dread the smell or taste of your tap water? If you answered yes to either of these questions, then Culligan can lend you a solution: the Culligan HE Softener-Cleer Water Conditioner. The Culligan HE Softener-Cleer Water Conditioner is designed to remove the harsh hardness impurities found in water, to give you soft water that is gentle on your skin, on your home appliances and that will make life easier. Hard water consists of hard minerals such as calcium, magnesium and iron. These minerals form a scale that makes water heaters and shower heads work harder to deliver, and that leaves behind scale build-up on appliances and fixtures such as showers, tubs, sinks and toilets—any place water is found. Hard water is also tough on your skin, leaving them dry and weak after showers and baths. Hard water irritates skin when used in loads of laundry, as hard minerals are left on your clothes long after being washed. In addition to reducing hardness and iron, the Culligan® HE Softener-Cleer Plus stops that all too common “Rotten Egg Odor” – hydrogen sulfide. Hydrogen sulfide is responsible for leaving black stains on your laundry and bathroom fixtures that are an eyesore and that make cleaning a difficult task. Sulfur also aids in bacteria formation, which is unpleasant for your home. When working together, hydrogen sulfide and hard water minerals damage the pipes and plumbing systems in your home either by clogging them or destroying the material that comprises them. All of these problems can lead to wasted time and costly repairs that could be avoided with soft water. To turn your home’s corrosive hard water into soft water, the Culligan® HE Softener-Cleer uses an ion exchange method, which exchanges hard water minerals for sodium chloride, so that soft water flows throughout your home.* The Culligan Chlorine Generator produces chlorine to aid in reducing harmful bacteria that is created by sulfur and iron, and to eliminate the problem of spotting and unpleasant water odor. The Culligan® HE Softener-Cleer system consists of three basic parts: a control valve, a mineral tank, and a brine tank. So what exactly can you expect from he Culligan® HE Softener-Cleer? You can expect a cleaner home, more efficient housecleaning, better tasting and smelling water, and longer lasting fixtures. The Culligan® High Efficiency Softener-Cleer water conditioner comes equipped with a remote display that allows you to control the conditioner from any location in the home. The Culligan Soft-Minder meter monitors daily water use and gives advanced systems diagnostics so you know how your conditioning system is working. In conjunction, a backlit display, equipped with a digital clock, warns you of system malfunctions so that you can contact your local Culligan man to assist you. The Culligan HE Softener-Cleer Water Conditioner also features a smart brine tank that automatically monitors salt levels and informs you of how many days remain before salt should be added to the brine tank.