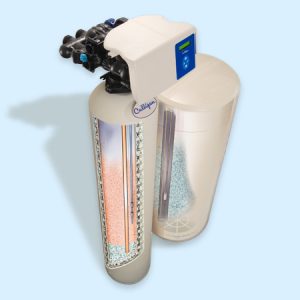 The Culligan High Efficiency Water Softener (Culligan HE) is a part of Culligan’s original family of water conditioners. The Culligan HE turns “hard” water, which is damaging to pipes and appliances, into “soft” water. But what is hard water and how is it detrimental? Hard water is a term for water that is rich with calcium, magnesium and ions. While these hard minerals are not harmful to humans, plants and animals, they do make life harder by increasing energy costs and eroding home plumbing systems and appliances. The calcium and magnesium found in water turns into scale, causing countless problems in the home, such as clogged pipes, reduced water pressure, difficulty in water heating, film and rust that rests on showers, sinks, toilets and silverware, as well as poor sudsing of soaps, detergents, and shampoos. In order to remove these hard minerals from your water supply, the Culligan water softener uses an ion exchange method. This is a salt-based method that trades the negatively charged ions of calcium and magnesium for the positively charged ion, sodium chloride, or salt. * Within this method, water passes through a tank containing sodium chloride resin. When the hard water passes through this exchange site, the resin takes on the magnesium and calcium and gives up the sodium chloride, releasing soft water into your water flow. In order to regenerate this cycle, a process called backwash allows water to flush out the resin bed. However, each time this process occurs, hundreds of gallons of salt-laced water are wasted, and sent back into the environment. The Culligan High Efficiency water Softener is truly efficient in reducing this waste. Culligan’s proportional brining allows the softener to only regenerate the part of the resin bed that has been used. The Culligan HE uses Patented Culligan Aqua-Sensor technology, which adjusts automatically to changes in water conditions so that regeneration occurs only when necessary. For convenience, the Culligan High Efficiency Water Softener also features a meter that monitors salt levels and informs you of how many days of salt water remain. The Culligan HE also deals with the issue of water that is too soft, meaning that it overly salty and sometimes slick to the touch. The Culligan High Efficiency Water Softener boasts a Dial-a-Softness Valve, which allows you to adjust the softness or hardness of water so that it feels just right. A remote display allows you to control the softener from any place in your home. Possibly the greatest benefit of the Culligan HE is that is makes appliances more efficient and long lasting, which saves you time and money. With the Culligan High Efficiency Water Softener, you can be sure to enjoy softer skin and hair and more efficient washing of clothes and dishes, as soft water is gentler on fabrics and doesn’t leave filmy residue wherever it dries. The Culligan HE also makes housekeeping easier by preventing scum and spots on appliances and fixtures. Potentially most important, is the cost efficiency that the Culligan High Efficiency Water Softener provides. With your new softened water, you can save money on energy costs, as water heaters, hot water pipes, shower heads and plumbing fixtures become cleared allowing water to flow more freely through your home.